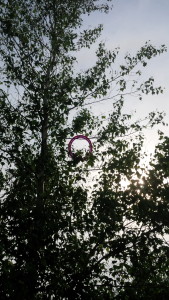 One of my favourite hobbies is to play frisbee. It’s great exercise, and a whole lot of fun. The model I use is the Aerobie Pro Ring (13″); which is a pink disk with a large hole in the middle. I’m not an affiliate of this company or anything, but seriously, if you want to see a frisbee fly a LONG ways, try one of these out! Eric Hemmings from California threw one over 1/4 of a mile in 2003 (for link to story, see here), and there are plenty of videos online showing people throwing this disk amazing distances.

Earlier this week, in what must have been an attempt to break Eric Hemmings’ Aerobie record, my brother unloaded a throw with all he had, and with the wind being strong (and blowing to the right), the frisbee hooked and landed about half way up the tallest tree next to the park we play in. We tried everything that day to get the frisbee down. The tree was covered with slippery bark, making it near impossible to climb, had no lower limbs to even step up on and was in a thick brush which was hard to access. To make matters worse, the ring perfectly went through a long branch and rested tightly against the body of the tree, which made the chance of the wind blowing it down next to zero. After what seemed like an eternity, we gave up and went home, convinced a trip to Walmart later in the week to pick up a new Aerobie was needed.

Late yesterday, we took a run to Walmart and discovered that they were all out of 13″ Aerobies (they had the 10″, but the smaller disks don’t fly as far)! That meant another visit to the park to see if there was some way to get the thing down from its perch in the tallest tree around. It was one of the hottest days of the year, feeling like +34 degrees celsius still at 5:30 pm, and we spent about a half an hour trying to push it out of the tree with the tallest branch we could find (couldn’t reach it), throwing things at it (couldn’t hit it – bad aim) and I even tried launching my own broom from home into the air (got the broom stuck too)! I’m not going to lie, I wanted to leave and drive across town to the other Walmart to see if they carried the product. Before doing this, my brother went farther into the woods and was able to find a tall, firm but light enough to lift, tree that he broke out of the ground (after about 15 minutes of wrestling with it). Approaching the Aerobie from a different angle (slightly from the side), with this tree in hand, he was able to just reach the disc and push it enough to dislodge it from the branch and get it back down to earth.

What does this have to do with business, and life in general? Even if you’ve tried what seems like everything, and you’ve “failed”, there’s usually another solution if you just look hard enough. It seems like the entrepreneurs I know are great at this, and it probably explains how they’re able to look at a situation, analyze it and keep going without quitting. If you have an issue that needs solving, take a step back and keep looking for a solution. Tackle the situation from another angle, with a bit of persistence, and don’t give up!